Over the past couple of months there has been notable success for many of our athletes.  Pride of place goes to Adam Saul Braddock who won the English under 17 indoor title at Sheffield in a time of 1.56:13. 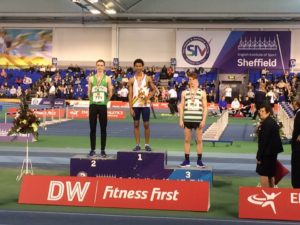 This bodes well for another season of progress and success for a young lad with a very bright future.

Psalm Roberts-Nash also won a Silver medal in the U20 800m English Indoor Championships at Sheffield with a superb dip on the line to achieve a PB. 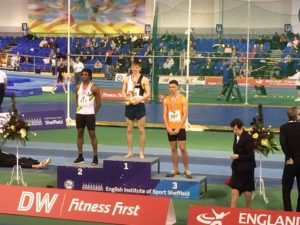 At the opposite end of the competitive career, we saw a  national 10 mile road racing title at Rhyl, for Tina smith. Tina is such an inspiration for many of us , on training nights throughout the year, and we all congratulate Tina on this massive achievement.
Dave Smith has also been collecting medals recently, with a bronze at the same 10 mile champs. He’s also been busy winning silver at the national 3000m indoors, with Jason Harding getting bronze at the same distance. Dave was also second in the Midlands masters xc at aldersley, being part of the winning m45 team for wolves and Bilston with James Lewis, Gareth Briggs and Simon calrow. 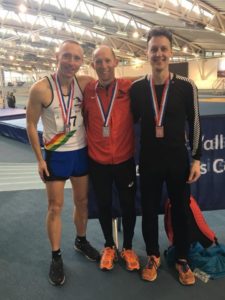 James Lewis gained a fantastic silver medal at British masters indoor 800m at lea valley, coming on the back of some seriously hard training sessions during the winter.
Finally, today saw medals galore for our Juniors at the midland 5k road race champs at Sutton park.  Thomas dornan, Louise Hackett and Lucy Evans all won gold in their respective age groups. Louie Lambeth gained silver in the under 15 boys race, and miles Pearce came away with bronze for the under 17 boys. In addition the under 15 boys team won the team prize with the under 13 boys finishing in bronze medal position.
Worth mentioning very strong top ten finishes for the senior ladies and mens teams at the 6 and 12 stage road relays.
Club getting stronger each year, and looking forward to competing for senior medals in the coming years.
We use cookies on our website to give you the most relevant experience by remembering your preferences and repeat visits. By clicking “Accept All”, you consent to the use of ALL the cookies. However, you may visit "Cookie Settings" to provide a controlled consent.
Cookie SettingsAccept All
Manage consent