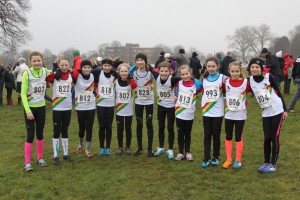 Paul Tabor reports the final race of the season was hosted by Birchfield Harriers at Perry Park. The photo above is of our all star Under 11 girls. There are lots of great photos which Jessica Carroll took on the club Flickr page.

Warmer weather than we have had for a while, with conditions being much better under foot than they were at the previous venue in Nuneaton, all pointed towards quick times on a flat course.

The club went into the final fixture in a strong second position, some 400 points ahead of Halesowen AC.  We couldn’t rest on our laurels and would need full teams in all age groups to consolidate our position in the league.

The under 17 women again were represented by the core of the team, with Leah Rutter, Amelia Silk and Gemma Evans able to compete.  Amelia Silk again led the team home in her first season for the under 17s, with Gemma and Leah running their final race for the young athletes. We look forward to seeing them competing in the senior competitions in future. The girls were agonisingly close to a bronze medla, finishing only one point behind Solihull in the final league table.

Finishing positions and league standings for the girls are below.

The under 11 boys race saw several new faces who have recently joined the club.  Many of the lads have been recruited following excellent races for their junior schools at Aldersley, showing how important these races are for the development of the club. 5th place on the day for the under 11s, and also 5th place in the league overall.  Incredibly, they were also beaten by just one point in the series overall, just as the under 17 women were, finishing behind Royal Sutton.

Finishing positions and league standings for the boys who completed 4 races are below.

The under 17 men were next, which is a strong category for the club.  The men went into the race in third position, but were without Ellis Garamszegi in this event.  Harry Cresswell had a storming run to be our first finisher in this race in 10th place.  The team came fourth on the day, which was enough to help them stay in bronze medal position in the league.  Superb season for the under 17s, and all of them bar Ellis, will still be under 17s next year.  Maybe one place (or two) higher next year!!!!

Under 11 girls were next up, who had a massive lead in the league, but were looking to complete the season with a bang.  The girls have been outstanding this year, and this race was to be the icing on the cake.  In this final event, we had 5 girls finish in the first 7 places, and 6 in the first 10, which our club has never seen before in any cross country race.  On top of that, we had 5 girls finish in the top ten for the whole season!!! Fantastic to watch, and a privilege to be a part of.

The race was won by Elizabeth Marshall, who completed her fourth race victory of the season, closely followed by Aliya Westwood.  Brogan Pugh had her best finish of the year in fourth, just ahead of Grace Smith in 6th and the fast finishing Beth Dyall in 7th.  A large number of these girls will

be running as under 13s next year, and I wouldn’t be surprised if they dominate that age group next year as well. However, we will need a few new under 11 girls next year, to help complete the team.  Kids / parents, please encourage friends and classmates to train with the club for this to happen.

Under 15 boys were next up. The team were lying in a very comfortable third position, and didn’t look like they could be caught, levitra online no prescription although we were very short of numbers going into this event. Any concerns were to be dispelled, with the boys again finishing third on the day.

Ryan Hodgkiss in his final under 15 race, again led the team home in 5th position.  Tremendous season for the under 15s, who should also be a strong outfit next year.

The under 13 girls were out in force at birchfield , with our biggest turn out of the season.  Great to see Evie Giddings back competing, as well as new members, Rebecca Perry and Jorgi Penderous.  It’s been a

tough season for the girls, but they’ve battled well to have full turnouts at each event, and went into the race in 9th position.  Great team performance at Birchfield saw the girls finish seventh, whilst they remained 9th overall in the league.  As stated earlier, this is likely to be our strongest age group next year, which will be exciting for those girls involved.  We say goodbye to Lydia Silk from the under 13s, as well as Olivia Davies, Ellie Willis and Jorgi, and they will help the under 15 girls be in a very competitive position next season.

The penultimate race saw the under 13 boys competing.  Adam Saul Braddock, in his final under 13 race, was looking to finish the season on a high. Adam ran a fantastic race, and won, in the process beating the midland Champion!!!  Brilliant performance by Adam Saul-Braddock.

As a team the lads went into the race in fifth position, but managed to jump ahead of Coventry Godiva to finish in fourth place in the league.  This race was also the final under 13 race for Leon Haffie-Hobday and Joel Humpage. Good luck in the under 15s next year.

The final race was the under 15 girls.  Amelia Samuels again ran a very smart tactical race, to take the lead at the end of the first lap, and remained in control to win her fourth race of the series. Fantastic achievement by Amelia in her first season of under 15 cross country racing.

The team finished fourth on the day and consolidated their fifth position in the league.  Final under 15 race for Beth Tabor, who moves into under 17s next year with Ashleigh Miles, Emilia Ferrara, Jessica Banks  and our new club member Elizabeth Allen.  Elizabeth recently joined the club and has already finished third in the staffs champs and 7th in the midland championships.  Under 17 girls will be very strong next year with those girls plus Amelia Silk.

The report began with reference to the clubs overall position.  The combined results from the day saw the club remain in second, and in fact pull further away from third place Halesowen.  Second place in this league is an amazing achievement by all the athletes who have represented the club this year, and the report also shows how we are looking to be stronger next year.  Catching Rugby and Northampton is going to be very tough, but that remains our long term goal.  Well done to everyone involved, coaches, team managers, and parents.

The junior cross country presentation night is at Fordhouses cricket club on Friday 6th march. Tickets will be available from the club priced £2.50 on each training night.  Everyone who has represented the club this season will receive their medals, as well as the team prizes and individual honours in each age group.  Special awards for most improved and best endeavour will also be handed out.  Look forward to seeing as many of you there as possible.

Overall points and league standings below.